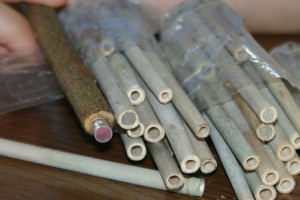 In March, I was inspired to raise blue orchard mason bees (Osmia lignaria) after a presentation by Dave Hunter of http://huntersmasonbees.com.

The story Dave shared at my beekeepers’ club meeting about how he got started really caught my attention.  He explained how he had bought a couple of tubes of mason bees and put them out as he ought to–in early spring, in a sunny part of his yard, along with some empty tubes for the emerging bees to nest in.  In June, He was happy to see many of those tubes had been filled with mason bee larvae.  For whatever reason though, the tubes he bought never hatched out!  Since mason bees are a native insect here in the Pacific NW, you can “grow your own” just by providing suitable homes.   It will take a couple years to build up your local population this way, but you don’t need to purchase your initial “start”.

The orchard mason bee is slightly smaller than a honey bee,shiny, and dark blue in color. Males are smaller than females, have longer antennae and have an additional tuft of light-colored hairs on the face. Females have hairs on the underside of the abdomen adapted for carrying pollen.

The bees prefer homes about the diameter of a pencil, about 6 inches deep, which are closed on one end.  These can be made by rolling paper around a pencil and securing the edge with glue.  Dave buys his tubes by the ten-thousand from a paper products company in Wisconsin.  Of course that’s a bit more than I need.  There are others out there who use bamboo, and nesting blocks of wood or plastic. 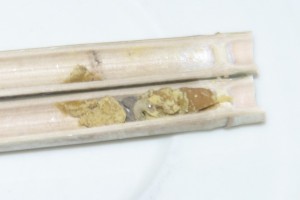 A lump of pollen, a tiny larva, and a mud separation

Our friend, Kathleen, was more than happy to have me haul away some of the bamboo trimmings she had thinned out from the around her house.  I can tell you that I can trim bamboo sticks much faster than I can roll paper around a pencil–so that is the method I used.   The hollow portion of this bamboo wasn’t quite as fat as a pencil, but I still went with it.  I put a few dozen tubes out at different around the house where they would get some sun and stay dry.  The places which worked were the ones which had the most sun.  I had volunteer mason bees fill up 5 of the bamboo tubes.

There is still a couple weeks left in the season for mason bees, but I brought in mine on the early side to avoid losing them to another predator–the parasitic wasps start flying in mid-June.  They lay eggs in the end of the mason bee nest and their larvae will eat all the mason bees developing in the length of the tube.  They are another beneficial insect, but I’d rather keep my mason bee collection safe.

Pollen mites are another menace.  These are not parasitic mites, but they can eat the lump of food meant for the baby mason bee.  In springtime, these mites will cling on the emerging bees to the point where it is too heavy to fly.  There are two solutions to avoid pollen mites.  One is to use new tubes every year.  Another is to send the mason bee tubes to Bakersfield, CA where there are no pollen mites (too hot & dry).  Since I don’t know anyone in Bakersfield, I’m going to put my 5 precious tubes in the attic for the duration of the summer.  (That’s another one of Dave’s hints)

In September these larva will be fully developed bees, just waiting for springtime.  That’s when I’ll transfer them to the refrigerator, or maybe to a safe place outside until it’s time for them to come out in March or April.

This entry was posted in Beekeeping, Farming and tagged Insects, Pollination, Swarm catching. Bookmark the permalink.