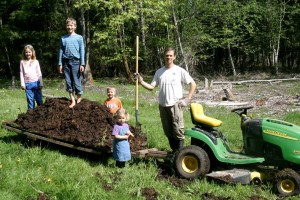 Here we are replenishing the pasture with compost

Because I farm, I am keenly aware of the seasons.  I see the grass start to wake up in February and I know it brings the first eggs from the geese.  In May, I watch flowers in yards, and along the road and wonder whether my bees can work them. I love rain in July, when it wets down the ground, because it means more plant growth before the “summer slump”.  September frosts come and nip away the bitterness of the alder leaves making them better fodder for the goats.  Winter is a time for rest and brewing plans for the coming year.

This is what permaculture really embraces–the continuous cycle.  The end result of one system feeds into the next–there is no waste, only a progression.  Minerals and water move from the soil, into plants and then to the animals and people, and back to the soil again.  Permaculture describes how this cycle flows with visible features such as plants, gardens, & water and also with invisible things like communities, cultures, and seasons.  Isn’t this the definition of replenishment?

And God blessed them, and God said unto them, Be fruitful, and multiply, and replenish the earth, and subdue it: and have dominion over the fish of the sea, and over the fowl of the air, and over every living thing that moveth upon the earth. (Genesis 1:28)

So if God just finished creation, and said it was all “very good”, what was missing that Adam should “replenish”?  It’s all in your perspective of its meaning.

God told Adam to use the cycle of the seasons, and to help the earth replenish itself as the year progressed.  He was to use the animals he was studying (he was naming them wasn’t he?) to cycle through the produce of the garden he tended.  What better way to tend the garden but to replenish the plants with manure, compost, & humus?

God already built the ball; Adam’s job was to keep the ball rolling!

This entry was posted in Christian Permaculture and tagged Christianity, Genesis, permaculture, replenish. Bookmark the permalink.