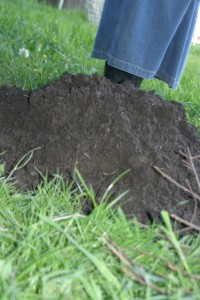 Moles are now my friends.  I’ve got a handful of mole traps that I haven’t used for years.  I’ll give them away to anyone who wants them; because I want every mole I can get to be working on my soil.  I’m even glad when I see their tunnels going through my worm farm!

I’m glad to see moles because about 75% of my pasture grass is growing on a thin layer of fill dirt from where the land was graded 25+ years ago.  Underneath this dirt is a layer of rich black topsoil, and the moles are bringing this to the top a little at a time.

I wear a pair of big rubber boots around most of the time that I’m doing chores, and I’ll kick these piles of dirt around to smooth out the dirt.  I’m not really fond of the rocks that come up, but it’s a fair trade for the good the moles do with turning the soil and aerating the ground with their deep tunnels.

At a total length of 8 to 9 inches, the slate black Townsend mole (Scapanus townsendii), is the largest mole species in North America. It occurs in meadows, fields, pastures, lawns, and golf courses west of the Cascade mountains.  http://wdfw.wa.gov/wlm/living/moles.htm

Our kids rescued a mole from one of our cats a couple years back and called me over to see it.  I knew I had changed my perspective when I asked them to release it back into one of the tunnels.

This entry was posted in Farming, Soil and tagged building soil, moles. Bookmark the permalink.