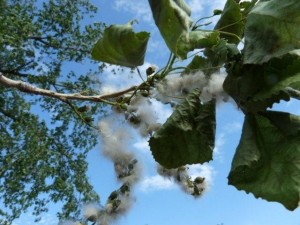 Snow from the cottonwoods is blowing now.  It reminds me of my first trip to Bellevue in 1998 for the job interview that eventually landed Kathy and I in this part of the country.   It also tells me we are “between blooms”.   The dandelion, maple, apple & other early spring flowers are all gone, while the summer buds haven’t opened yet.

Last year I learned the hard way that there aren’t many flowers for bees to gather nectar from in late May.   I had stopped feeding my new hive at the end of April.  At the beekeepers meeting in May 2009, I asked if anyone knew why my worker bees had expelled the drones to die outside–it was because they lacked food.  For established hives with spare honey, this gap in flowers is not a big deal.   For the hive I started in April, it means I’m feeding them again.

The new hive was bringing in a lot of nectar during the height of the spring blossom season.  The bees needed wax to make new comb from, so they ate this nectar to create the beeswax for the new construction.  This new hive has nothing to spare right now.

The blackberry flowers will open up in a couple more weeks, and bring the summer flow of honey back to the hive.

This entry was posted in Beekeeping and tagged Beekeeping, feeding bees. Bookmark the permalink.