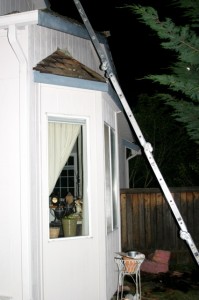 On Wednesday afternoon last week, I received a call from a landlord in Maple Valley who had a swarm of honey bees in the wall of his rental house.  I told him that yes, this is something I’m interested in, and no, I don’t charge to remove honey bees.

After a quick stop at home for some tools & a bit of dinner, I pulled into the cul-de-sac of beautifully manicured lawns at about 6:30 PM.  The owner, Mark, was outside to meet me, as were the tenants, Preston, Betsy and their teenage son.   Although the swarm was on the opposite side of the house, they quickly invited me inside to avoid the bees.

Betsy & her son had seen the swarm hanging from a backyard cedar tree branch around noon, and had watched from the house as the bees left the tree and entered the little roof above the window nook.  This was when they called Mark for help.

I looked at the place where the bees had swarmed into, to see if there was a way to do a trap-out or otherwise remove them without tearing into the house.  They have entered this little covered space through spaces between the wood shingles and the wall.  The roof was tight against rain, but the bees could still find gaps large enough to crawl into.  Setting a trap to exclude the bees was not going to work in this case because there were just too many holes.  There were probably 20 places they could get through, and most of them well hidden. 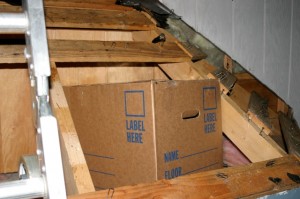 A cardboard box works great to hold the bees.

The house was about 20 years old, and Mark said it would be okay for me to pull off the brittle shingles from small roof over the window.  You know, I’m pretty good at destructive projects, even when wearing a bee-suit.  After about 30 minutes of work, the cluster of bees was exposed enough for me to slide in a cardboard box to catch it.  Two swipes of my goose feather bee brush separated the ball of bees from the wooden eaves, and the bees dropped neatly into the box.  I closed up the box, but left the two hand-holds open so the flying bees would be able to join their sisters, which they started doing almost immediately.  I left the bees for a couple hours, and brought them home after dark.  There was not one left behind.

Mark commented this was a win-win situation.  I made a huge mess in the owner’s yard, didn’t have to clean up a thing, and he was glad for me to do it.

This entry was posted in Beekeeping and tagged Beekeeping, Swarm catching. Bookmark the permalink.