Maureen the cow has joined the milking routine 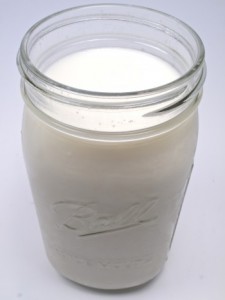 Cow's milk with an inch of cream on top. Photo courtesy of www.alwayshungryny.com

We planned on letting the calf have all of the cow’s milk for the first three weeks, but life got a little busy, and we ended up giving it some extra days.  Last Friday evening though, it was time for us to change the routine, and we penned “Abel” (a-bull) the bull calf up for the night.

Saturday morning came and Kathy woke up at 5:30 to the sound of Maureen and Abel calling to each other.  She hopped out of bed and moved Maureen from her long pasture tether over to a short rope tied to a nearby alder tree.    That tree is now her “milking stand”.

Kathy told me that Maureen did a bit of dancing that first day, but she learns routines fast and is now standing nicely.  (Hooray for a smart cow!)  The first milking was mostly for training, and yielded about 2 cups of milk.

We have a once-a-day milking routine at our place.  The kid goats and the the calf get penned up at night and are given back to their moms after milking is finished in the morning.  The milk production we lose is made up for by the health of the young animals, and an easier chore routine.

On Saturday we got a a key pointer from a cousin in New Mexico who has done this before.  She suggested that we let the calf suckle for a short time to help the cow let down her milk.  It does make a big difference with how fast the milk comes, and the “hind” milk the comes down is supposed to have a little more cream content.  Perhaps most important is the Mo knows that her calf is OK, and settles in to chew her cud.  Kathy has also learned to lean her shoulder into Mo, so the cow has a clear sense of Kathy’s location.  This morning Kathy brought in a little over a quart of milk, and we expect that to continue to increase some as the routine gets established.

The milk itself is delicious, and it is a treat to have cream.  Maureen is only getting the grass off the pasture right now–it’s a mix of colonial bentgrass & common velvet grass growing on mediocre soil.  Neither of these grasses are really good forages, but it’s the best the soil can do at this point.  These weak soils are one of the main reasons we chose to buy a Dexter cow–they can do well even with less than ideal forage.   If the milk is good from this grass, I can’t wait until “Mo” is mowing our better soil!