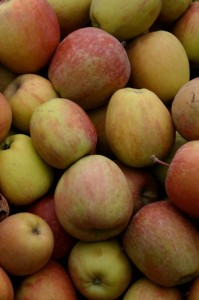 We made a 611 gallons of apple juice last weekend!  Fortunately, we had about 40 people to share it all with.

This is the 3rd year we have been part of this apple pressing group, which has been going on for more than 25 years already.

The routine is that the group drives to Eastern Washington one day at the end of October, to glean apples left on the trees of organic orchards.  We haven’t made the picking weekend yet, but this year we offered to host the group for the pressing weekend.

The routine has been pretty well worked out.  The apples are staged by variety, washed in warm water and individually inspected before going to the presses.  Any bad spots are cut out from the apples, but generally the apples are whole when they enter the grinders. 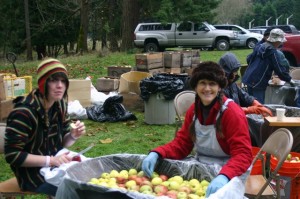 There were 5 presses working this year, and they started working at about 9 AM, and ran continuously until the last apple was processed at about 2 PM.  With ~45 people helping, cleanup went quickly and the last person departed before the sun went down. 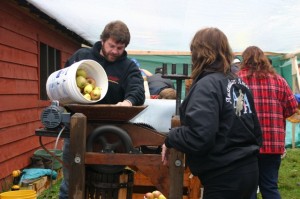 Our share was 35 whole gallon and 15 half-gallon jugs.  Much of this has gone as gifts, some is bubbling away in a carboy for next year’s hard cider, some has already been enjoyed (of course), and the rest is now in our chest freezers. 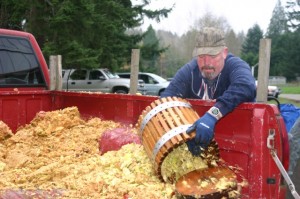 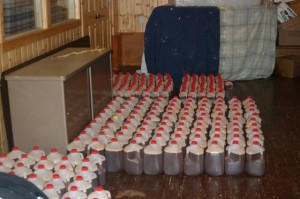 This entry was posted in Apple cider, Home products and tagged apples. Bookmark the permalink.