The taste of raw milk 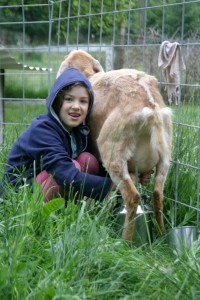 The pastor at our church in Bellevue grew up on a farm in North Dakota, and we got a jewel of a story out of him last night after church.

As a kid, Doug’s family had a dairy and milked about 70 cows. There were 4 of them who worked the morning and evening milking routine. Two ran the milking equipment, one spent his whole time washing the udders on the cows, and the fourth was out doing the field work of feeding & moving cows. The surge milker equipment ran on a vacuum system which put the fresh milk into 3 gallon sealed milk units hung below the cows being milked. When a unit was full, he had to haul it into the “clean room” and transfer it to 10 gallon can which was hauled to the Yegen Grade A Dairy in Bismarck. The barns were always immaculately clean.

It was a big deal when the Weiser family was accepted by the dairy. The company sent out a representative to visit the farm, and the first thing they pointed out was the wooden silo adjacent to the dairy barn. The cows loved the corn silage, and it was good for them, but it made the barn smell like, well…. silage. The odors of the barn are breathed in by the cow and the flavor almost immediately gets into the milk. The silo had to come down before the farm could join the dairy. I learned about barn odors & milk flavors in a cheese making seminar I took a couple years ago, and it’s true. We’ve tasted the difference in our goats’ milk between the days where they are out in the pasture vs. closed up in a pen–though they were eating the same food.

Pastor Weiser went on to describe the quality control process that the dairy used on each of these 10 gallon batches of milk. They had one person who tasted a sample from each 10 gallon can of milk–hundreds of them every day. Pastor said it was easy for the taster to tell the difference if one of the farm hands messed up and let milk from a cow being treated for mastitis get through the system–that can would come back with a note on it telling why it was rejected. Most people can taste that one, the flavor is off for two reasons: 1. because of the infection, and 2. because of the antibiotics.

There were other reasons why the milk could be sent back to the farm. The main one is they needed a consistent flavor to market to the customer. If the flavor of any can of milk was off it would come back with a detailed note, such as “grazing knapweed after 4 pm.” The farmers took these notes from the German taster very seriously–and never questioned him. If it said the cows were grazing knapweed yesterday afternoon, then they went out to find where that was so they could fix the problem. I’ve learned about this from other sources as well. As the day progresses, the pasture builds sugars & carbohydrates from the sunshine. At night, these sugars are changed to proteins as the grass grows and recharges on moisture. With all this together, it’s no surprise that you could taste the details about the cows’ diet from the day before.

The dairy also dictated how much time on the pasture the cows could get. In the spring flush, when everything is green and growing fast, the cows actually had to be limited in their grazing time. That fast growing spring grass which makes the milk so nutritious also tasted different from their standard. As a result, the cows stayed in the barn lot many hours each day until later in the summer when the pasture had lost much of its richness. Generally, the cows were brought in from the pasture before noon.

It’s amazing how much we as a culture have given up in exchange for a consistent food experience. Our little farm has a wide mix of pasture & browse–We graze thick grass on dark topsoil, blackberry vines, and sometimes the weak stems of what grows in graded fill dirt. The milk and animals directly reflect the food we gave them the day before, in quantity and quality.

I, for one, enjoy the many different flavors & qualities that come with this.

Here’s a site on the milker unit we carried on endless trips to the milk room.