Chickens & Cows on the Pasture 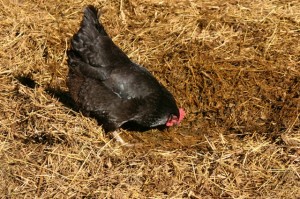 A chicken hard at work scratching up compacted bedding

A cow pie is money, and I like to get it back in the soil “bank” as soon as possible.  Of course, I’d rather not spend my time following around the cow with a rake to spread the manure out as soon as it hits the ground.  I’ve got chickens lined up to do that job for me.

It’s the permaculture principle of putting things where they ought to go, but I think of it as having the animals doing their own work.

We’ve moved our chicken tractors into the pasture areas, and we let them roam around during the day to forage in the grass.  They are learning that there are bugs living in the older cow pies.   It doesn’t take long for a chicken to scratch a load of manure up and spread it over the grass–that’s one of the things they do best. 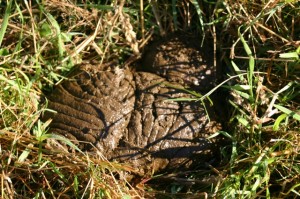 This is a concept Joel Salatin has championed at Polyface farms in Virginia, and which is getting more popular elsewhere.   For egg farmers, the idea is sometimes called an “eggmobile” because the chicken pen is mobile and comes into the pasture a few days after the cows have left.  (See Natures Harmony Farm  for an example)  Since I only have a couple acres, and a small pasture, the chickens get to be mobile and the pen stays put.

I experimented earlier this summer with moving the fully enclosed chicken tractor after the cows, and the birds did a fair job of breaking up the “cow bombs”, but the tractor-pen just didn’t cover enough ground.  There was too much space between the cow pies for one or two 5 x 10ft chicken tractors to cover.

I was reluctant to let them free-range for 2 reasons: 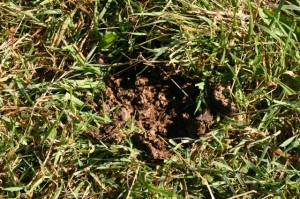 A chicken scratched up this little cow pie

It’s now August, and the garden isn’t as inviting to the chickens as it was in the spring.   Of our 10 chickens, only 2 of them are light enough to fly over the pasture fence now, and they haven’t found the garden.

We also moved the pens into the pasture and kept them in place for about a week before releasing them.  This “transition” time gave the chickens a chance to get familiar with where “home” was, so they now 8 of the 10 go and roost back in their pens at night.  There are 2 which still need to be put away, but at least they are the easy ones for Joel to catch.   It’s important to lock away the birds at night, since the raccoons, coyotes, & bobcats would love a chicken dinner.

The eggs sometimes appear in random places, but doing a daily egg hunt has been a fun thing for the kids to add into their routine. 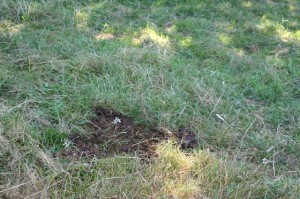 I’m hoping that there will be a native dung beetle population growing up around our place soon, since the chickens aren’t completely thorough in their pasture cleanup work.

So far, day-ranging the birds has worked fine!