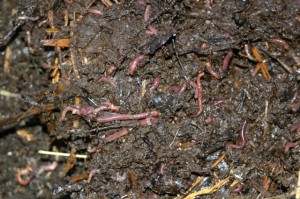 I’ve run a worm box for my kitchen scraps for about 10 years, and they work great.  We usually generate between 2 and 10 lbs of scraps each day, too much for a single 2ft x 4ft worm box.  I solved that problem by just building more worm boxes–I have 3 of them and they are wonderful!

In 2009, I introduced some of my red wriggler population to my manure pile.  They did a great job.  After about 6 months of increasing population I could tell that it was working because they had really filled up the heap.  The compost was still composting at about the same rate, but my system had changed for the better.  I now have a host of worms working through my compost.

I no longer create large heaps of hot compost, and I no longer have to turn the piles.Don’t get me wrong.  I have nothing against running a hot compost pile–nothing will break down coarse organic matter more efficiently than a piling a couple of yards of debris onto itself.  The reason I was looking for a different option was the time and effort it took to turn the piles.  It might be different if I had a tractor with a front loader on it, but I don’t.  I’ve got some beautiful technique with my pitchfork, but it still takes at least an hour of shoveling to turn over about 5 yards of compost (my average compost pile).

Vermicomposting uses what is called a “cold compost” method.  Kathy and I spread the animal manure & bedding along in windrows that are about 4 ft wide and 15 feet long.  The new material usually goes on top, but it can also go along the side the row.  As the worms finish the old compost they move over into the new manure.  The holes they leave as they work through the material keeps the pile aerated with enough oxygen to keep the other bugs, bacteria, & fungus alive and happy.  This means that I don’t have to turn the pile because the worms are doing it for me.

My "worm farm" is made of long rows of compost

After about 3 months, there are only a few worms left in the finished compost.  It can be spread around where ever a nice boost of fertility is needed.

Red wrigglers are also valuable to other people who are looking for a quick boost to their compost piles or kitchen worm boxes.  A gallon of bedding densely filled with red worms runs about $15.  It contains a little more than a 1/4 lb. of worms, about a thousand worm cocoons, as well as a host of springtails, pot worms (Enchytraeidae), and sow bugs.  For those who are willing to separate worms from their bedding, clean worms generally sell for about $20/lb, and then the 12 qts of vermicompost they were living in goes for another $15.

The chickens & ducks also love to harvest their own feed from the compost pile.  They get fresh protein from the decomposers in the manure waste, and I don’t need to do anything except keep the manure coming to the same place.