This afternoon’s project was spreading Boron on our pastures. 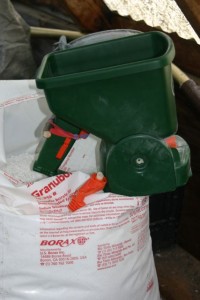 Boron is a trace element that helps with calcium and nitrogen availability.  There is a good article about it on the Albrecht’s Animals page.  It is also soluble, which means in rainy Western Washington, it’s quickly washed out of the soil.  That’s what the soil test showed too.  We were to add about 3 lbs of boron supplement (13%) per acre.  Instead of mixing a foliar spray to apply dissolved borax, I bought a 50 lb. bag of “Granubor”, and walked around with a hand-held spreader.  The mineral grains were just the right size to make a 20 ft swath, so I was able to cover the ground I needed in less than an hour.

The $15 spreader I bought did show it’s weak points though.  It worked well enough, but the all plastic construction gave up the ghost just as I was finishing.  I was cranking the handle so fast for so long that the shaft melted and twisted off.  I’m glad it died at the end of the project instead of the middle!  3 lbs/acre is a pretty light dose, and I don’t have any ideas of how I could do such a thin rate without using a tool.

Another complaint I have about using a small hand-held spreader was that it’s too difficult for my left hand to hold up the spreader for more than a few minutes.  I ended up using a rubber band to hold the “trigger” in so my palm and fingers held the spreader against my stomach.  That gave me enough leverage to let my right hand turn the crank and still quickly cover the ground.

In the picture, you can see the broken handle, and the rubber bands I used to hold the spreader open.