The First Goose Egg of Spring 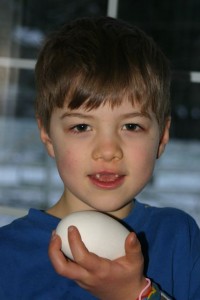 Joel ran to find me yesterday morning because the first goose egg of the year had appeared.  This year’s first egg came from a pair of American Lavender Ice geese.

He is responsible for taking care of the chickens, and will often go “on patrol” after his morning chores are done.  Apparently this includes checking all the pens for any new eggs.

We had separated out our 8 pairs of geese into breeding/nesting pens on February 8th, because it’s time for them to begin laying.

Keeping them as pairs works well because each nest has an aggressive gander dedicated to protecting the eggs and the sitting female goose from crows and other predators.  Keeping only one female in the pen prevents extra eggs from being added by another goose who sometimes may choose to lay in the wrong nest.

I will collect the first 8 eggs from each nest because they have a very low fertility.   This gives me a chance for some choice omelets and lovely blown goose eggs.  I’ve incubated these first of the season eggs  in the past, and my experience matches that of Dave Holderread’s description in The Book of Geese:

“It is common — although there are exceptions — for the first six to eight eggs laid by year-old geese to hatch poorly so you may not want to bother setting them.  However, eggs produced during the latter part of the season often hatch reasonably well, especially if yearling breeders were well-fed throughout their first year of life.”
p. 52

This entry was posted in Geese and tagged Eggs, Geese. Bookmark the permalink.