2012 through 2016 was a season filled with life’s ups and downs, which limited our ability to keep the Cultured Home website current, but we are thrilled to be back, now!!  We are so looking forward to 2017!  We are excited to announce that we are partnering with Deena Rumsey and what a blessing to do this together.

LOOK…..Summer Classes, are here and will teach how the soil, animals, and most of all, people live in a healthy ecosystem!  It is truly amazing how if the soil is healthy, every living creature benefits.

Look forward to new updates on a regular basis on Harmony Harbor (our farm), which houses The Music Barn and Cultured Home classes…those names could only speak of blessing and enjoyment in LIFE!!

Posted in Farming | Comments Off on Life in 2017

Here I am working with my axe to chop up some freshly cut alder trees harvested from one of our pastures.  These were from ~30 trees that were prepared for our pollard demonstration.

A coppice is when trees re-grow quickly from live stumps, which are harvested about every 5 years.  A pollard is when the tree is cut from a stump that is tall enough to be out of reach of the grazing animals.  It is an excellent way to quickly grow wood, improving soil while continuing to provide shade for the animals and grass in the pastures.

The coppice attempt a few years ago failed because the animals ate the young alder shoots.  I’m excited to track the progress this year!

In the mean time, the wood harvested is drying so it can help heat the house next winter.

Posted in Farming | Comments Off on Axe Demonstration

Ruth’s day with Maureen the cow

At dinner, Ruth Helen told us her story of the day.  She started by telling Abigail and me and covered everything again in greater detail when Kathy and Samuel came in for dinner, and when we called grandparents so they could hear the story firsthand.  Ruth’s story went like this: 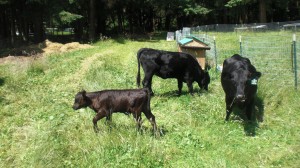 Mo, our gentle cow with Mocha and Notable

“The story is about Mo.  I just wanted to feel what it was like to ride Mo.  She was laying down so I got on her back and kind of kicked her sides to get her up.  So she walked around a little bit.  I rode her up on the hill, from the woods to the barn.  I had a little longer turn because I had to turn her, or else she would crash into the barn.  I turned her with her ears because I didn’t have reins.  It actually worked!  Then I mostly went in a little circle.  When she was walking in a circle, she started to trot a little bit, and then it was even funner.  I held on to the neck.  It wasn’t bumpy.  Then she sat down, and I got off.  Nobody was watching except for Mocha (the yearling heifer cow), and the baby calf.  Mocha was too skittish, and Notable (this spring’s calf) was too small for me to ride them.

Later I tried to get Mo up for Joel to have a turn, but he missed it.  Mo got up when Joel wasn’t watching.

I wanted to get some fresh milk, and I didn’t want Mama to see.  I didn’t get the milking pail, I used my mouth for the milking pail and so I just stuck the milk right into my mouth.  How I got the milk out was the nipples were dry so I couldn’t get it out so easy.  I pushed on the udder, and then squeezed the teat so it squirted into my mouth.  I got a LOT of milk.  Joel and Mo got a taste because I squirted some into Joel’s face and I squirted some into Mo’s mouth.  She was chewing, and I got it right when she opened her mouth, so I got it right at the right time.  The milk was warm and YUMMY!”

This is quite an adventure for parents’ to hear about from their 5-year-old daughter.  At least her mom can laugh, since all’s well that ends well.  Too bad nobody saw this, because I wish we had a picture! 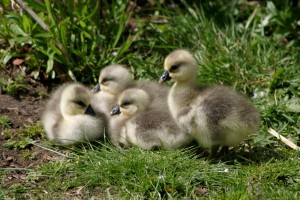 Is it possible for a family to produce nutrient dense eggs, milk and meat without being full time farmers?  If you are interested in growing more than a garden on your property, or are dreaming of getting started on a few acres, we’d love to encourage you!  Come join us as we share the joys, challenges and surprises we’ve had as we’ve made the transition from urban life to urban farming since 2005.

Contact Nathan or Kathy for detailed directions or other questions
425 306 5679
Nathan@culturedhome.com

END_OF_DOCUMENT_TOKEN_TO_BE_REPLACED

Posted in Farming | Comments Off on Intro to Sustainable Family Farming

I’m getting good at getting this stuff spread.

On Sunday, June 3rd, I applied 13 bags/520 lbs in less than an hour using my “flower pot” technique.  I fill 2 plastic flower pots with gypsum, hold one in each hand and shake them as I walk to evenly spread a 10 ft swath.  I started doing this because it could be done in the rain, but I’ve continued it because it’s about 10 times faster than using a 22 inch drop spreader.

On Saturday, June 9th, I applied 17 bags/680 lbs to cover most of our remaining pasture & grazing area.  There are 5 bags left and a little more space remaining, but I’m glad to have the bulk of the work done, and more than 3 acres covered with 1200 lbs.  I thinks that’s pretty good for 2 hours work with 2 pots and a wheelbarrow!

Why gypsum?   Our soil test showed we had very low sulfur levels.  Since sulfur is part of all proteins, and it’s got to be there to grow good enough grass to support animal health.

Posted in Farming | Comments Off on Spring 2012 Gypsum Application 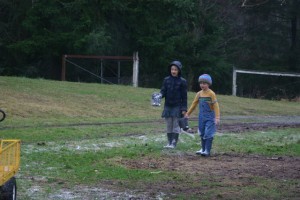 We had friends over and spent a little more than 2 hours spreading lime.  There were six of us filling and shaking plastic flower pots over about 3 acres.  It was a wet day, and everyone was covered with a patina of white by the time we finished and took our lunch.

We applied 32 bags (1600 lbs) of powered agricultural lime at a rate of  533 lbs/acre. Next time I’ll buy a little more to ensure that I can cover all the corners that we didn’t quite reach.

Many hands make light work, and I’m very happy that such a low tech solution works so well!

Posted in Farming | Comments Off on Fall Lime Application 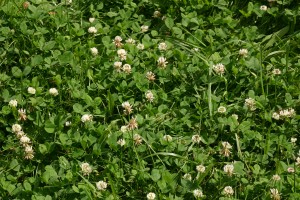 Last December I applied 500 lbs/acre of agricultural lime to our place.

In March, we put down about 300 lbs/acre of gypsum, and about 0.5 lb/acre of boron.  Gypsum has sulphur which is needed in protein, and boron enables the calcium to be used in the plants.

So what did that accomplish?

The grass was sweeter last year.  I knew that, because I went around tasting it.  I also knew that because I test the pasture juice with a refractometer (and a garlic press).  In absolute terms, we still have a long way to go because our brix readings topped out at 6% total dissolved solids.  In relative terms, it’s a huge leap because last year we were at 4%.   These are low numbers because to animal health really depends on grass with brix above 12, but we are getting there! END_OF_DOCUMENT_TOKEN_TO_BE_REPLACED

Keeping the grass fresh in the goose pen 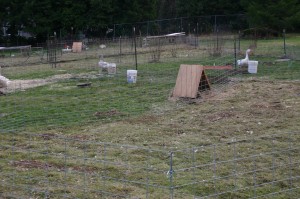 I love grass. It feeds the animals and keeps things nice & clean. The geese love it too, and will eat it down to the roots if they are on it long enough.

The challenge is: How do you keep fresh grass around a nesting goose, without moving the nest? I do it by putting the nesting shelter in the middle to the paddock, and then splitting the paddock in half with a temporary fence. When it’s time to shift the geese to the other side, I move the temporary fence over to the other side of the nest. This puts the nest on the “green” side of the paddock without having to relocate the eggs or the sitting bird. END_OF_DOCUMENT_TOKEN_TO_BE_REPLACED

Posted in Farming, Geese, Grazing | Tagged Geese, grass-fed | Comments Off on Keeping the grass fresh in the goose pen 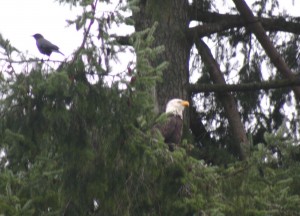 Can you find the eagle in the tree?

It’s not uncommon for us to have eagles come by, but we got to know one up close & personal last week.

Most of our ducks are penned up in 5′ x 10′ open bottomed pens.  They get moved to fresh grass every day, but they don’t get to run free.  Our runner ducks are the exception.  They are too high strung & intelligent to be happy in a pen.  They are excellent foragers, and do a great job on holding the slug & bug populations down on our place.  At night, they are closed up for protection against raccoons, but at first light, they have been free to roam….    But not any more!

On Monday we heard the geese making a terrible noise.  When Kathy and I went out to see what was the problem, we discovered an eagle had decided to breakfast on one of these free range runner ducks. END_OF_DOCUMENT_TOKEN_TO_BE_REPLACED 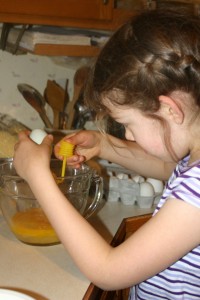 The value of my eggs tripled this week.  I just sold a dozen duck eggs on ebay this morning for $16.50, shipping not included.  The best part is that I got to eat them before they sold!

I’m moving into the egg shell business.  Blown goose eggs move out pretty regularly–I’ve already promised to ship off the rest of the ones I get this spring.  The surprise came when I found out that there is a market for blown duck eggs too! END_OF_DOCUMENT_TOKEN_TO_BE_REPLACED